Can’t help but notice that I haven’t posted in a century or so. Sorry much. Am trying.

Lots of things going on, this side of the screen. I’ve undertaken to produce a new anthology, to benefit author/editor Joe Pulver and his wife, who are having a tough time of things due to illnesses, and that’s going great guns, with a ToC to die for and early days still. We have about 90K of material on hand and every indication that there will be twice that at least.

Nightmares in Yellow, it’s called. The cover will be decorated with work by artist Derek Pegritz, and it should be out in time for Christmas.

The three chapbooks are soon to debut. All three are set in the CRAZYTOWN universe… two of them are part of the book, and one takes place shortly before the events in the book and the short novel THE FORGOTTEN GOD, which is set to appear next spring.

GREEN will be first,

and the former Pizza story NARANJA SOUL should be out by Hallowe’en.

We’re at it again…Planet X publications and I, that is. We’ve embarked on another book-length project that developed from a casual discussion, as the Test Patterns books have. I’ve just about finished the editing and proofing of the Creature Features volume and dove right into heading up Caravans Awry, a series of teals and poems about traveling circuses on Rt 66 in the mid-sixties, the heyday of those marvelous carnivals.

Caravans Awry . Fourteen tales and poems of carnival knowledge in the 1960s
from the folks who bring you Test Patterns — and — Creature Features , Planet X Publications .

Thanks for your time and attention! Happy reading!

3. Erica Ruppert-Pretty in the Dark

7. James Fallweather-Little House in the Suburbs

12. SL Edwards-With All Her Troubles Behind Her

26. John Linwood Grant-For Whom There is No Journey

Wanted, monsters!
The loose theme is the late-night weird tv of the 50s and 60s, but well-written tales will over-rule theme, as long as there are monsters.
Stories should be in standard ms format, 2500+ words. No headers or footers please. Payment is 100 dollars US. Originals only, no reprints, and no poetry this time around. Multiple submissions are okay but only one will make the final cut.
Submissions window is from June 1 at 12 am PST through 12 am July 1 31 PST. Extensions are negotiable.
Submissions to moderan(at)hotmail(dot)com. Please email or voyage to this page if you have questions. We’re also running an art contest — vote for your favorite creatures to appear in the little tv screens on the cover.
Planet X Publications thanks you in advance for your fine work!

I gave up blogging in favor of Facebook posting years ago, but I’ve come full circle and am back to blogging instead. This form has a little more permanence, I think, and if I’m gonna be ignored, I may as well own it.

Though my first published story was in 1977, I’ve been a full-time writer for just a couple of years. I attempted to go full-time just after coming hope from the illness that caused my disability, with a big backlog of material that I fondly imagined was ‘good enough’ and a lot of ‘belief’.

Didn’t work out that way — one, I didn’t have the energy or stamina I had been used to and couldn’t maintain that schedule, and two, the material desperately needed reworking — which I’m still doing, six years later.

Hard to keep going in the face of such massive apathy. I haven’t written anything that has galvanized people into talking about it for years, though that doesn’t stop stuff from getting pirated. I’ve sold more than 5000 kindle-copies of my chapbook, mostly through direct sales. But I have four reviews on Goodreads/Amazon.

Gotta trust in the process though. I know my stuff is good enough. No editor has ever returned a piece saying “This really sucks.” Instead, “this really doesn’t fit what we’re trying to accomplish here. But good luck with this story. I’m sure you can sell it — somewhere else” is the common response.

I resist comparisons…and some of this is sour grapes probably, but I see people whose work isn’t real good selling consistently, and it chaps my ass. But I’m a middle-aged white male, and I guess I should just get used to being marginal. Isn’t like my imagination is inclined to the mainstream.

And I’m not gonna stop, though it gives me pause (and yeah, there are times when I want to stop because working in a vacuum sucks). Friends and even some objective critics have told me they enjoy the work…it’s just that it doesn’t reach enough people. And I don’t know how to get that to happen, other than to keep throwing spaghetti.

I’m not alone. There are lots of us pasta-throwers.

But I ask you — if you’ve read a thing of mine, how about some feedback? Just “I liked it” would be fine. I think you have to write a couple more words than that, but it doesn’t have to be in-depth…that’s the point. People who write for themselves rarely try to get public.

Yeah. I’m having a minor crisis. Not ‘impostor syndrome’, but ‘invisible man’ syndrome…brought on by lack of success of worthwhile material. Help a brother out if you can. 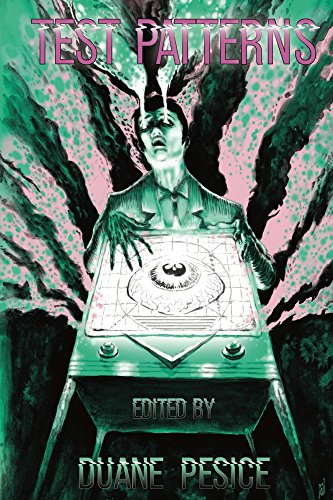 The last post on this blog was about opening my Patreon. As I write, I’m considering killing it. Perhaps I should have built an audience first.

Eh. Was worth a try. I haven’t killed it yet, but it’s a lot of effort to maintain. I’d rather put  most of the stuff here. And there’s gonna be stuff.

Forgive me, reader, for it has been eight months since my last blogfession. Mea maximum culpa, five godfaddahs, ten lords a’leaping, and a beer. Praise cheeses.

For blessed are the cheesemakers, as the Python wags would have it.

I’ve been busy. In that span, I’ve self-published two books and a chapbook duo, and edited what promises to be one of the best weird fiction anthologies on the market, a thing called Test Patterns.

Art by Nick Gucker, cover design by publisher Michael Adams. If you click on the pic it takes you to the GoFundMe, where you can secure a copy in a variety of formats.

It has these in it:

We’re doing the final proofs this week. I am all tingly. I could piddle. Santa is breathless.

And this is still out there:

Just the perfect stocking-stuffers in any of their forms, I assure you.

Any of these are available in ebook form to reviewers.

Thanks for reading! I’ll be back soon with somethings for your ears.

I’ve finally broken down and put together a Patreon page. It’s just a beginning — I don’t know exactly what to do yet…so I’m offering a story or a piece of a wip each week, plus access to music that then public won’t see for a while and the opportunity to have me write something from your story prompt.
Just part of an overall effort to organize and focus. I’d welcome participation and suggestions. Thanks for reading!

Blood in the water, blood in the land. Southern Gothic crossed with B-Movie, like John Farris and Flannery O’Connor wrote a script to be directed by Jim and Artie Mitchell. Lurid and mesmerizing, festooned with horrors taken for granted flowing into each other like water under the mangrove trees overhung with Spanish moss in little old New Alabama…the narrator’s camera eye does not shrink from depicting each gross and engrossing incident in this catalogue of terror.
It’s just past the Civil War in the American south. Luann Lee escapes the preacher only to be “rescued” by Red, who should probably be played by Rory Calhoun if you can’t get Kurtwood Smith, in the movie, when someone like Brian Yuzna or Stuart Gordon directs it.
I can just imagine Red’s face, with a furking leer on it and the blood running from his mouth. Michael Faun depicts him so expertly, draws the environment so clearly, evokes crawling horror so well, that you’ll never get the taste out of your mouth.

I wrote this a good many years ago, but I think it still applies, especially right now, with all the unrest in the US, so I’m posting it up.

with apologies to the late Gil Scott-Heron

Marching, charging, surging, curving
bearing truths, and so unswerving
largely barging, herding burdens
speaking in tongues, and so, unnerving
the revolution will not march on little cat feet
though its aims may seem a trifle foggy to the uninitiated

Grunting, jumping, lunging, sponging
crime rate’s up, retention’s plunging
skimpy pimping stinking thinking
booted up, the network’s linking
the revolution will not turn on a dime
though donations will be gratefully accepted

the revolution will overthrow the status quo
the corporations will be deregulated by negative cashflow
we’ll be good to go
inarticulation will be commonplace
this articulation will be ubiquitous and prominently displayed
why not make a stand
the disenfranchised will be mobilized
the misbegotten will be unforgotten and unafraid
great yet still unwashed outside
and in canyons of steel and glass, the herd will march on the head of a pin
and air their dirty laundry again and again
until that discoloration will seem commonplace
and the hues will be red white blue and gray
and indeed all the sixteen million tints of the rainbow
for the world is not black and white, nor gray, but a technicolor show
the revolution will be brought to you in wide-screen surround
damn near lifelike, a theater in the round

Never complain, never explain
Do what you must, excuse our dust
Never apologize
Notwithstanding understanding
Beg to differ with the gipper
Win one for us
The revolution won’t be fought with swords
Slurping, chirping, lurking, jerking
Winging, slinging, pinging, singing
ambiguous and unrelenting
spreading pending gender bending
roles reversing and revolving
the evolution of the revolution beginning

The revolution is electric
eclectic
respect it, reflect it
respective directives:
inflected invective
querulous, perilous
garrulous, careless and hairy
the revolution is intention
emotion
commotion, explosion
intoning baloney can only be phony and fixed
watch the parking meters for signs of the apocalypse
by the light of the setting sun

Established 2008 — A fearless faith in fiction by Des Lewis — Employing an ‘intentional fallacy’ consciousness — Various passions of the reading moment — Elizabeth Bowen, Robert Aickman and many others — Please click my name in sidebar below for this site’s navigation and backstory