I don’t like Mondays. Let’s just say that, explain the title and blow the lede right out of the water with one swell foop. I did promise me that I’d do 500 words a day on the blog so here we are.

(The content that I had put together is on rain delay right now — the unfortunate death of author/editor Sam Gafford threw a monkey wrench into the affairs of my esteemed con-conspirator and the simulposts are on hold for now.

But I don’t want to neglect this page any more, especially given that all of my other urls lead here. So here I am. I expect mostly I’ll just bitch about stuff. If you don’t like screeds or complaining or lefty politics, I understand.

I could post stories but I’m still stupidly hoping to be paid for some of them, and a couple of dozen are due for collections. Am not in the best mental state or in the best spirits right now — fighting too much mental bullshit to work right now. Thanks, brain. Love those bad chemicals.)

Gilroy. Yay. A fucking SIX YEAR OLD CHILD. Please let’s keep those assault weapons on general sale. Or better yet, issue them along with birth certificates so everyone can have one ALL THE TIME. I hate guns. I think they should all be melted down to slag and used to make nails and screws and shit for infrastructure. Don’t @ me.

And THIS is the President? Fuck. Stop dignifying his bullshit with coverage and endless jawflap. The entire media machine are unindicted co-conspirators in this fucking circus. I’m pretty happy that things worked out so I didn’t have to cover this eternal circle jerk. I got out of politics-ghosting and column-and-article-finishing for little money and less credit just in time. My NDAs have run out but I’m going to keep the bylines to myself. I don’t think I’ll revisit that side-hustle. Will stick with the baseball, as frustrating as that is, as it contributes to my never-ending “y not me?” syndrome.

(I write daily columns… three days a week (Monday, Tuesday, and Friday), I do Cubs history factoids. It’s a good column but not especially well-read. The other four days I write/compile Cub Tracks, a complicated affair that’s essentially yardbarker with a literary frame and scientific drop-ins. The baseball history column was originally part of this but was spun off.

Sometimes I write other articles but they’re typically not well-received. The readers object to my lack of statistical data viewpoint and find that my literary humor puts too much spin on the ball.)

Where the hell was this going? Oh yeah, this is your brain on pain. Hooray fibromyalgia. 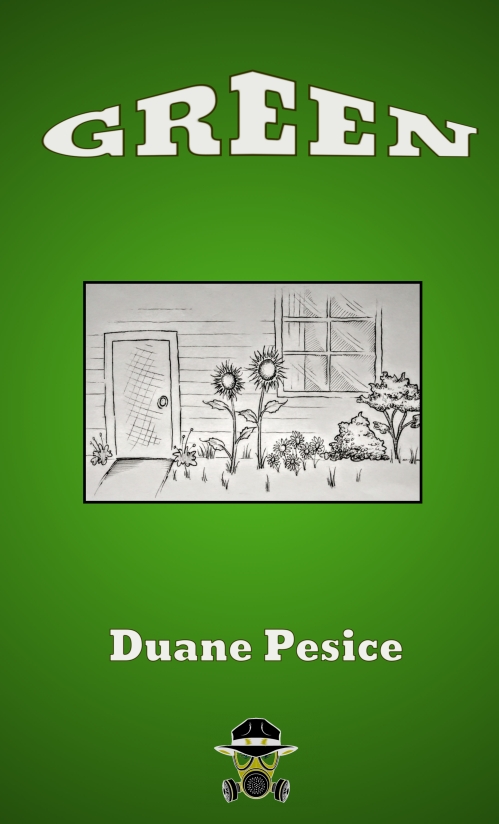 I have a book coming next week.

GREEN will be the first chapbook from Oxygen Man Books. It’s a teaser, like the Test Patterns teasers, just a bauble to advertise the upcoming CRAZYTOWN collection and the related THE FORGOTTEN GOD short novel.

Maybe the way out of career doldrums is just producing more work. You have to be ready when lady luck calls, I reckon. I’ve done a huge amount of work these past five years, and there just aren’t enough outlets for the kind of things I like to do.

But, for now, I’m going to indulge my inner scared little kid and watch some cartoons or something. Thanks for reading.

This entry was posted in moderan. Bookmark the permalink.

One response to “Silicon Pringles”

A fearless faith in fiction — Employing an ‘intentional fallacy’ consciousness — Various passions of the reading moment — Walter de la Mare, ELizabeth BOWen, Robert Aickman and many others old and new — Please click my name below for this site’s navigation and my backstory as intermittent photographer, writer, editor, publisher & reviewer.