Ross Lockhart noticed my review of “Chick Bassist” and was kind enough to put up a shoutout on Facebook. Good guy, Ross. Fine writer. I have the two Books of Cthulhu that he edited and am going to embark on that adventure soon. But first I need to finish the books ahead in the queue…

Yesterday, while waiting for cabs, I read through Dennis Etchison’s Bradbury/Matheson. I had this to say initially:

EXCELLENT pair of interviews with titans of weird fiction. The Matheson portion is much longer and deeper but both are illustrative of the men’s personalities and approaches.
The interviewer wisely chooses to interject little of his own personality into the proceedings, instead letting his subjects speak for themselves.
A good deal of the content concerns both authors relationships with Hollywood. Very interesting indeed.

That’s it in a nutshell. Ray bitched through most of the thing, though not without a sense of humor. Matheson got nostalgic, after a fashion. He spent much more time in Tinseltown than Bradbury, and knows the lay of the land better.

Before I left for my appointment with catheter doom, I had a small epiphany and tied together the parts of an epic I’ve had knocking around for a couple of years, entitled Cassilda and the King (<click to listen-a new tab will open). The King, of course, in this case, is the infamous Chambers-created KIY, the veritable wearer of the pallid mask his ownself.

The one who might be Hastur, or just a high priest, or perhaps Nyarlathotep. I’ll have more speculation along those lines in portions of the upcoming Fear and Loathing In Innsmouth ebook. Still messing with the cover. 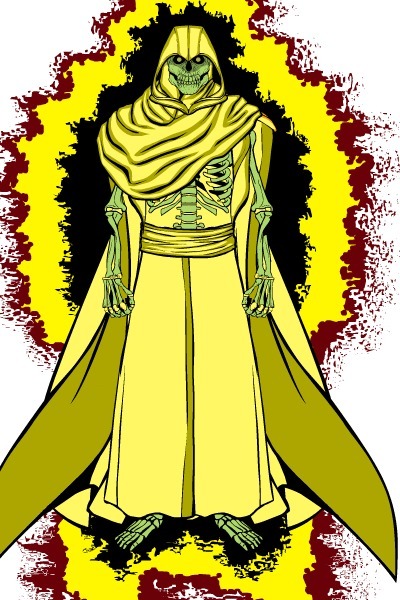 This image might be part of it..I generated it at the Heromachine website. Good place for stuff like that if you can’t draw or are pressed for time. I need to do a Cassilda too, robed in red. Perhaps today.

I shot the tune right over to Joe Pulver, basically just to let him know it existed. He’s more into jazz but likes some prog too. Didn’t hate it as far as I know. Might do a little research into period music and try another if I have the right sounds.

Very nice. I have physical therapy today. Right now it’s more about getting strength back in my shoulders than anything else. The pain is gone…at least 90% of the time. I still get the occasional twinge when I’ve been sleeping poorly or have been maintaining a bad posture for a bit.

No more Tens machine…no more e-neck-massages. Pfui! My favorite part. Instead I get a hot pad for ten minutes. Not awful, but that neck massage!
Then I do a bunch of exercises. Hand behind the back, opposite hand on head, crane neck toward opposite shoulder. That’s one. I do some simulated breaststrokes, a couple of other things. Do em at home too, while I’m typing away.

Gotta leave in about an hour. Not looking forward to it. I’d just as soon stay here and work on stuff. The book cover especially. It’s occupying my thoughts to an alarming degree, which means that book needs to get out soon so that I can make room for another preoccupation.

Fiction Reviewing by D.F. Lewis (2008 to date) — Please use excellent Search Box below plus the Navigation Guide towards the top of the front page — A fearless faith in fiction and the art of the preternatural — Not a study course, nor part of any commercial book reviewing process.

The Internet's Number One Site For Old-Time Baseball Photos And Essays, Over 1000 Articles, All Fully Categorized For Easy Access!

The Book of Hangman

Covering the Cubs One Level at a Time